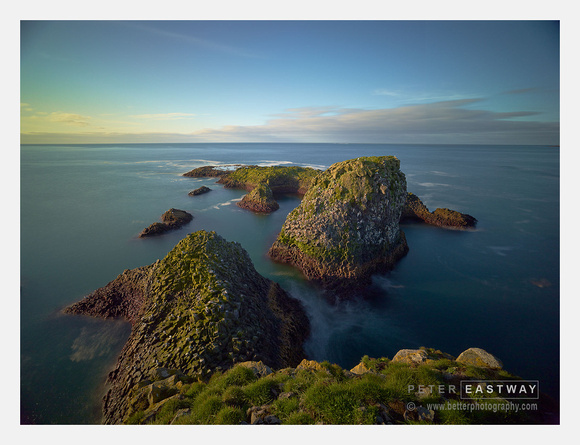 A little over a year ago, I was driving around southern Iceland with Kevin Raber and the Phase One PODAS.


Our first day was disappointing, to say the least, because the landscape was shrouded in low cloud and heavy rain. Actually, I shouldn't say 'disappointing' because I have a dozen shots taken out of a rain-splattered windscreen which I think look pretty good. But I digress!


One advantage of shooting in Iceland in May is that the sun sets late and comes up early, so although we didn't get much photography done on our first day, by getting up at 2.00 am the following morning and retracing our steps, we managed to photograph most of the places we wanted to and still managed to catch up with our original program. Nothing was missed!


Well, maybe nothing. I'm pretty happy with this photograph at Arnarstapi. There are some amazing volcanic rocks sitting just off the coast and I spent a wonderful morning photographing them with long exposures.


This image was a 30 second exposure with a 10X neutral density filter, using an IQ180 digital back and a 23mm Rodenstock Digaron. It's my standard wide-angle Alpa rig and I use it a lot!


Yet behind me was a quaint little village with some ramshackle buildings, ringed by ponds of still water, reflecting a backdrop of majestic, snow-covered volcanoes. Should I have turned the camera around?


To be fair, I did shoot a few photos of the little village, but while doing so, all I could think about were the rocks off the coast behind me. I can assure you it was a very confusing morning, trying to work out how to make best use of my time, realising we didn't have too much of it!
© Peter Eastway