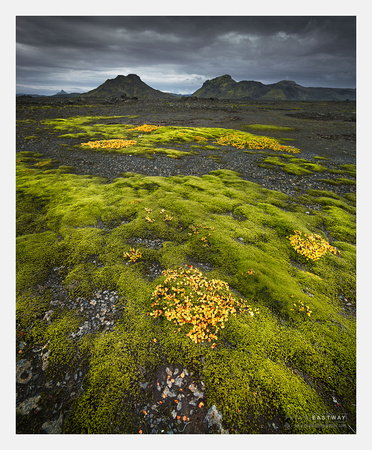 For my photo this week, I'd like to ease my conscience. Last year when I was on our Iceland workshop with Tony Hewitt, Christian Fletcher and Antony Spencer, we had a great bunch of 20 photographers putting up with us. And I think it's fair to say that as a group we all did remarkably well, although I'm sure from time to time there were little 'wrinkles' in the cosmos.

This photo was taken on one of those wrinkles.

We were driving through some pretty remote landscape, not far from Landmannalaugur or we might have actually been in it. Google this place and you will be amazed at the weird landscapes. We had stopped not long before and the four of us had agreed we really needed to get moving if we were to get to the next location.

However, shortly after this, Tony and Christian pulled their cars over to take some photos and I ticked them off about it. How, I asked, were we going to get to our hero location if they kept on stopping their cars to take amazing landscape shots? I couldn't blame them. Antony just followed their lead (he never had any wrinkles), but I left with a carefully phrased comment that expressed my displeasure.

My group and I took off in our car, intent on getting to the hero location, but a couple of hundred metres later, they all called out stop, stop, stop! The landscape had become even more interesting and I found it hard to ignore their pleas!

We pulled over, tumbled out, grabbed our cameras and a few minutes later, the other three cars came along.

"Oh, so we're in a hurry, are we", someone asked me, pointedly. The looks on Tony and Christian's faces said it all.

So, gents, I apologise. But the photographers in my car were quite correct - it was a good place to stop for a photograph. What we liked most were the little yellow flowers in the middle of the green mossy stuff. Antony could probably give us the botanical names, but for me, it just looked amazing!

As it's not possible to have sufficient depth-of-field from the foreground to the background in a shot like this (unless you're using a tilt shift lens), I focus stacked the image to keep both foreground and background sharp. This is a relatively easy subject for focus stacking.