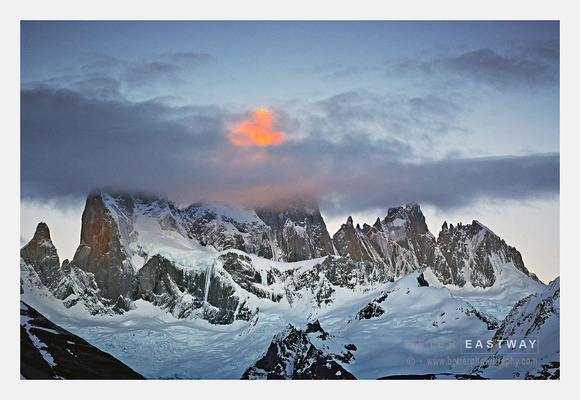 I was looking through my photos of Patagonia taken back in 2005, observing how many great shots I had never processed. Well, to my mind they were great, but naturally many will have personal baggage that affects the way I view them.

And now that I am processing them in a more modern raw conversion application (I'm using Capture One Pro, but Adobe Lightroom also does a great job), the quality of the files I'm producing is even better.


I've also noticed a slight difference in the way I process my files. I think I'm a little softer, a little more elegant in the changes I make, whereas in the early days of digital it was a matter of seeing how far you could go without getting caught.


The image above wasn't used at the time because it's a little quieter than the image at the end of this article, but I like it a lot. Rather than waiting for the whole of Monte Fitz Roy to light up with the early morning sun, I took the photo when just the peak was catching the light. I also like how the cloud obscures most of the peak, and that there's an orange glow at the bottom of the clouds, reflecting the light of the peak above. It does my head in working out how the light gets reflected and refracted like that!


The file out of the camera is a little flatter than what you see here, but that's normal and expected. Raw files are designed to record information, raw processing programs are designed to turn that raw information into something that is visibly pleasing.


In processing the raw file, I have used the white balance eyedropper on the snow at the base of the mountain. In real life, the snow is blue at this time of the day, reflecting the sky above. However, experience has taught me that most people don't like seeing snow that is too blue, so I have taken some of it away. By using the white balance eyedropper, it sets the colour balance of the area to a neutral grey and everything else falls into place. The result is still very blue in the sky and surroundings, but the snow itself is given some legitimacy.


Although 'correct' in terms of the snow, I then grabbed the temperature slider and moved it a fraction to the left, producing a slightly bluer result again. So, I'm half way between what the camera captured and what the eyedropper recommended - and to my eye it has the cool, silvery, early morning feeling to it.


I want all of the image to be that cool blue, except the tip of the mountain. Now, when you add blue to an image, you lose the strength of the yellows, so I have had to manually reintroduce some orange to the mountain top. I did this in Capture One by using the Advanced Color Editor, selecting the yellows on the mountain peak, and increasing the colour saturation. I tweaked it up and down a little until the result on my Eizo monitor looked great. The result you see on your screen may look a little different, depending on your monitor and your browser.


In Capture One, I also used a gradient mask and darkened down the top of the image just slightly, maybe half a stop.
The raw file was processed out and tweaking the file in Photoshop was relatively minimal. WIth a curves adjustment layer, I Alt/Opt + Clicked on the Auto button which brought up the Auto Color Correction options and selected the one that looked the best - to my mind the Find Dark and Light Colors worked the best.

Finally, I added some stronger contrast on another curves adjustment layer, filled in the mask, and then used my brush on the Wacom Cintiq 24 Touch to brush in some contrast and lightness over the snow under the cloud. It lifted the image nicely.
© Peter Eastway