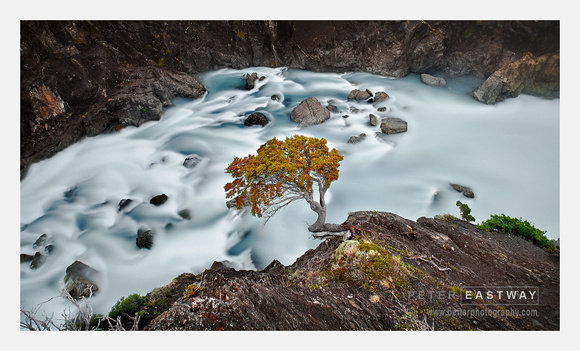 I hope the gods conspire to get me back to this little cataract near Pehoe. It's in Patagonia on the Chilean side, underneath Torres del Paine. And I hope the authorities haven't put up a fence around it, but I reckon this is pretty unlikely!


The day was overcast with light rain and a light wind. We were hoping for sunshine and the potential for rainbows rising skyward from the falls to the right (just out of picture), but it wasn't to be and I didn't really mind. Bright sunshine would have created some really strong contrast and perhaps some ugly shadows cutting across the scene, so I took the cloud cover as a bonus.


This is shot with a Canon 1Ds Mark II and a 24mm TS-E (perspective control) lens, tripod mounted. The exposure is two minutes which accounts for the whiteness in the water, the fairy-floss effect as some disparaging souls like to call it. I like it! I've rated the sensor at ISO 400, which meant the light must have been pretty dim (usually the Canon is rated at ISO 100 when it's sitting on a tripod). ISO 100 would have meant an eight minute exposure, but this was just two minutes.
© Peter Eastway