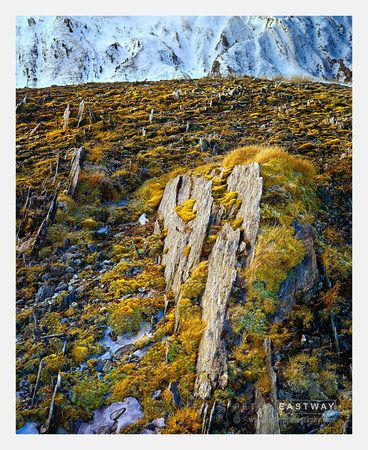 I guess it's not surprising that photographers all gravitate to interesting subjects. Of course, what is interesting to one photographer may not be of interest to another, but when it comes to landscape, there are generally some things that resonate with us. We either like them or we ignore them.
Wandering around a ridge line below Mount Adams in New Zealand's Westlands a couple of weeks ago, I had followed Andris Apse up a a steep slope, half covered in snow and the other half covered in spikey plants that were best avoided. We were hoping for a wonderful vista on the other side, but we were disappointed.
We continued along the ridge for a little way, looking for an easier descent when Andris stopped. I looked up and immediately I saw what he was looking at: these wonderfully shaped rocks sticking out of the ground, covered in a myriad of small plants and dusted with ice.
Andris was pretty quick to set up his tripod and stake his claim, so I had no hope of muscling him out of the way. (Of course, the reality was quite different: he just looked around, thought about it and then set up his tripod, but since I'm telling the story...)
I wandered further along the outcrop, looking for a similar or better pattern of rocks, but after setting up my camera in a couple of places, I returned to the outcrop that Andris was photographing.
"About time for lunch", I suggested and if there's one thing that gets Andy moving, it's the thought of food and a hot cup of tea, especially at 2,000 metres above sea level.
As Andris moved away, I quickly located the holes his tripod had made (just kidding, but now it's Andris's turn to tell the story) and set up my camera.
I haven't seen Andris's photo yet, but I am sure mine will be quite different because it was shot with an ultra wide-angle lens, whereas Andris was shooting with a medium wide-angle.
Of interest is that I focus stacked the exposures, but only for the foreground. From the bottom of the frame to the middle distance is tack, tack sharp. The detail is simply wonderful to behold. However, I left the flanks of Mount Adams a little blurred in the background as I didn't see the need to keep them in focus. The image, for me, is in the foreground and the angles of the little rocks.
© Peter Eastway