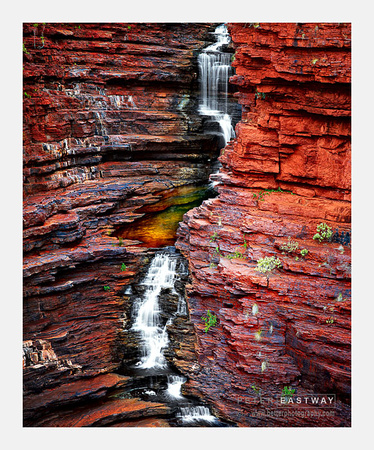 It was late in the day. It can get warm in Karijini, so we usually do a little bit of classwork during the heat of the day because we can hide in a small airconditioned room. After the heat, we wandered out from the Retreat towards Joffre Falls which is no more than 10 to 15 minutes away. In the afternoon, the falls are in complete shade which in some ways has the best lighting. All that is illuminating the rock face is the blue sky behind the camera, so the shadows are not too severe.


I used a tripod, naturally, and a cable release. However, more important than the tripod was the aperture used. I find with my 120mm Phase One macro lens that it isn't a great performer at f4 or f5.6. However, at f11 it really comes into its own and produces very crisp results. There's a new autofocus version of this lens which I haven't tried as yet - I will need to save up my pennies!

I photographed this angle with a range of crops and different lenses, from an 80mm standard which included the sky above, down to a 300mm telephoto which really focused in on the falls and rock texture. This is the one I decided to go with.

In terms of post production, not a lot has been done, although I was careful to remove the blue colouration from the white water - the blue didn't seem to work with the reds of the rock particularly well, but of course, this is a personal thing! And the contrast in some areas has been increased to bring out the texture in the rock.
Peter Eastway