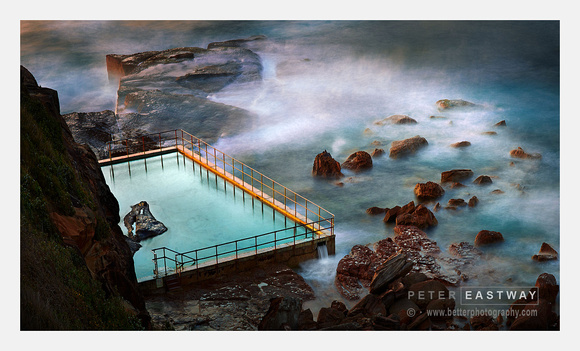 Last weekend I got up early. Well, let's be brutally honest. It wasn't that early because it's winter and the sun doesn't come up until just before 7.00 a.m. So I was up around 5.30 a.m. and in the carpark at North Curl Curl in Sydney at around ten to six.


However, I wasn't alone! There were around another 20 or 30 keen photographers, ready to walk out and around the headland, searching for photos as the sun rose. Some had very impressive clothing and footwear, allowing them to brave the swell that was crashing around the pool. I was a little more circumspect as a dousing of my camera would prove rather expensive!


And while my photograph above was taken from a fair distance, in complete safety, I was down at the pool's edge as well, but I struggled to get an angle down there that I was really happy with. Besides, I really like this angle and the way the left side of the pool is hidden by the cliff. We imagine the pool is rectangular, but in actual fact, the pool doesn't 'complete' properly on the other side (out of view). Not that that matters. It adds to its character.


So, who were the other photographers? All were members of the Flickr Focus (Australia - Seascape & Landscape & Macro Photography) group.


In addition to posting photographs on Flickr in the typical social media way, they do something really high tech: they actually get together on real shoots. People meeting people in a literal way. Now that's novel! Post onto Flickr where you're going to go to take photos and chances are another Focus member will join you. And for the sensible shoots, the photography is followed by breakfast at a local cafe - it's amazing how good it tastes too after an early morning start!


Take a look on Flickr and search for the Focus group - there's some great work being shot up and down the NSW coast! I might have to practice a bit harder to see if I can join the group!
Peter Eastway