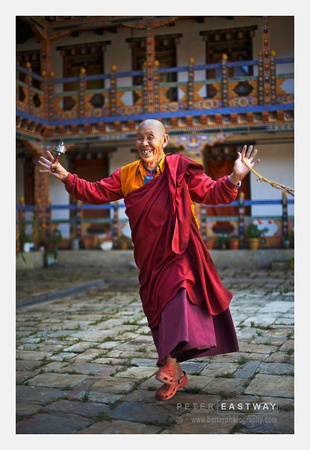 This photograph was taken in a nunnery on the way down to Jakar from Ogyen Chholing. It sounds like I know where I am going, but there aren't that many roads in Bhutan and chances are I've got it wrong anyway! However, we stopped off at this nunnery and met a number of the nuns who showed us around. They were all quite serious and I wondered if we were merely an inconvenience in an otherwise busy day.


The nunnery was brand new and had a lot of feminine touches that were missing from the more austere monasteries - and hence I was surprised that the nuns were quite austere in comparison. But maybe that was just me being over sensitive.


As we left, we met the oldest nun and boy, was she a character. We asked, very formally, if we may be permitted to take her photograph, to which she agreed. However, it was all too much for her as half a dozen cameras started clicking, so she put on a little dance and laughed herself silly. She found the whole situation highly amusing.
It was a wonderful moment, ruined only by the strong sunshine. Would she pose inside the nunnery in some shade? I spoke to one of the guides, who spoke to the nun, who happily agreed. We set the photo up and I took a few formal portraits, and then I suggested to her that she might like to dance again.


Well, she was delighted to assist and that's how I captured this photograph! I just love the prayer wheel in one hand, the prayer beads in the other, and the wonderful coloured sandals. I think they were imitation Crocs!
Peter Eastway