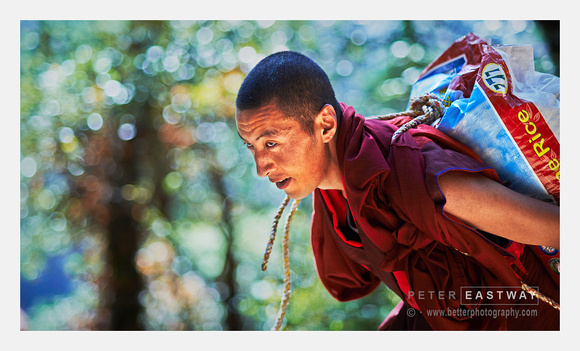 Fifty kilograms. Doesn't sound like a lot until you have it on your back, climbing the steep, steep trail that leads to the Tango Monastery, an hour out of Thimphu in Bhutan

Today, the monastery is a working university offering courses in Buddhist philosophy and there are some 70 student monks in attendance. They look great in their bright red robes. The original monastery was founded by Lama Gyalwa Lhanampa in the 13th century, but reconstructed in 1688 by Tenzin Rabgye, the 4th Temporal Ruler. It was restored in the mid 1990s and to a traveller's eyes, it is an amazing structure perched on the side of a mountain.


And that's where we were, climbing up the side of the mountain, but fortunately for me, I didn't have the 50 kilograms on my back. That was being shouldered by a young monk and we saw several monks on the trail similarly burdened. They passed us, of course, even with their heavy loads of rice and supplies.


Water up the top in the monastery seems to be plentiful, but food for the residents is man-handled up. I saw a broken flying fox (a cargo basket on a length of cable stretching down to the valley below) on the hillside near the top and wondered how long it had been broken, and if there was some way we could help to have it fixed. However, the monks would probably say there were higher priorities than saving their backs from a little manual labour!
Peter Eastway