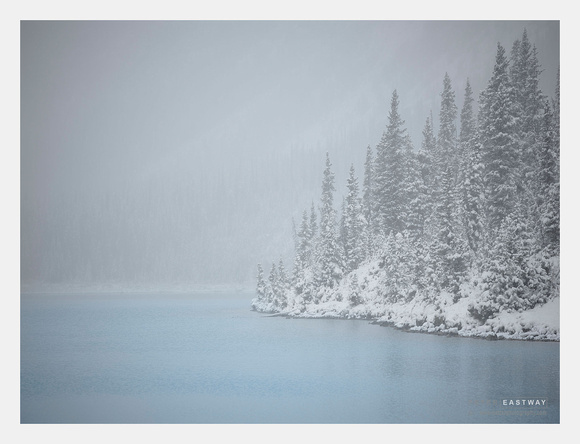 Being a Sydney-sider, snow is a novelty for me. I've skied most of my life (two skis, not a board) and there's nothing I like better than to visit locations in winter when there's a chance of snow. And from a photography perspective, I think snow photos look their best when the snow is freshly fallen.

Many people think snow is snow, but it's not the case. Fallen snow changes over time. Generally it gets heavier and droops - it doesn't look so fluffy. The slightest of winds will shake the snow from the trees. And as the days pass, snow gets dirtier and dirtier with wind-borne dust, dirt and foliage. To get really classic snow shots, you need to be there while it's snowing, or just after the snow has fallen and the light is coming good.

So, how do you know when it's going to snow? Well, you don't, but there's a better chance in winter than in summer, unless you're going to the Arctic or Antarctic, of course! Tony Hewitt and I take our SW USA and Middlehurst NZ photo tours in winter because there's a chance it will snow, but of course, there are no guarantees. And sometimes it can snow when you don't expect it, such as when we did the Canada photo tour in September 2017. Of course, along the Icefields Parkway in Alberta, it can snow any time of the year. We were hoping for the autumn colours to really turn it on, but we were just a couple of weeks too early (or the colours were a couple of weeks late!), so early snow was a great alternative.

The photo above was taken at Bow Lake in the early morning. It was snowing quite heavily, but light and dry and not affecting the cameras too badly. Keep a spare battery in a warm pocket and change it over if you find your camera acting sluggishly - it's usually because the cold drains the batteries more quickly, but all the modern cameras I've used have no trouble operating in below zero temperatures, certainly not for a few hours here and there. Click here for details.

Following the photo tour, I put together a Momento Pro photo book with a selection of images, all lightly processed in Capture One. I've loaded a FlipBook version onto the website if you'd like to take a look - and maybe you'll also be encouraged to join Tony and me later this year in Canada as we do another photo tour down the Icefields Parkway - this time a little later and hoping for the autumn colours. Even better, autumn colours and snow!